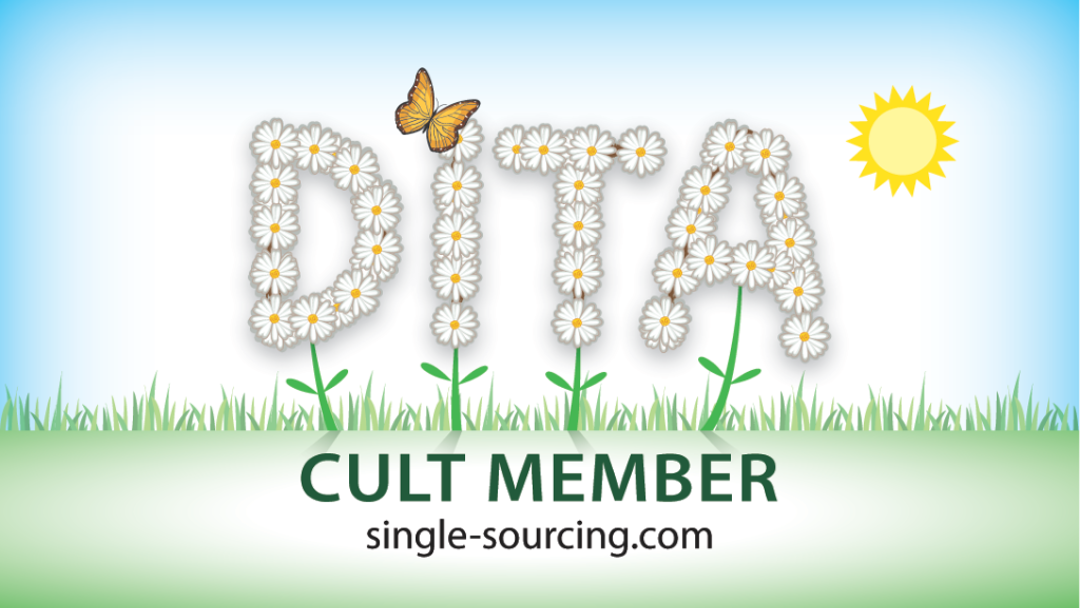 At Lavacon last month I gave two presentations: one traditional and one...Not. We all know that I like to experiment right? TC Camp, TC Dojo, TC Mastermind groups are my most successful and well known. This time, I decided I would write up three skits and let the stories convey the lessons I wanted to get across in my presentation.

I wrote up three skits:

I told my story about how I adopted a DITA mindset: How I learned to fight bookbrain and love the topic. And, like all good cult members, I gave tips on how you too can convert to the teachings of Guru D.

It was really fun to do -- nerve wracking since it was the first time I'd written skits. But I had some help.

I inducted several members of the audience, including Keith Schengili-Roberts and Tom Magliery to testify at the BA Meeting. (They read from scripts.) Thanks to Kit Brown-Hoekstra for joining me in passing out the message of Guru D. 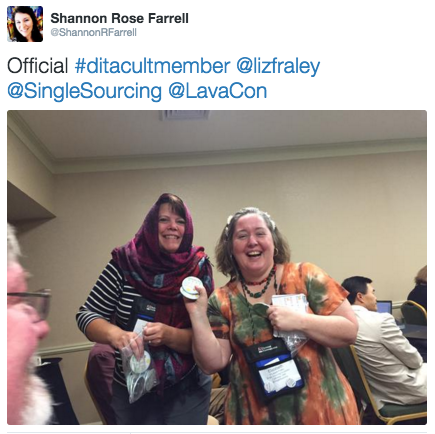 Peppered throughout the presentation, were quotes from actual writers, real people, real situations, that demonstrated the struggle with changing your book-based mindset to topic-based writing. Keys to watch out for if you're moving to DITA or Topic Based Authoring and have a scared or reluctant staff.

I think the best part was when I listed the 12 Steps to achieving DITA enlightenment. Or maybe it was How to Spot a Bookbrain. We will all have to wait for the reviews to find out.

Everyone who came to my session got a DITA Cult Member button at the end. These were one-of-a-kind buttons that I got requests for all week after they'd been spotted in the wild.

If you've never been to LavaCon, it should be on your list to try. LavaCon is the one traditional conference where you can do non-traditional things. Thankfully, Jack Molisani agreed to let me try an unusual presentation style to see how it worked. We had such a great time, I will try it again. After all, I can only get better, right?

Did you miss it?

View the slides and read through the script.

Join the Cult of DITA